Starting from GreenVulcano® ESB v3.3, VulCon Eclipse plugin has been enhanced with a new feature: the graphical debugger. Now it’s possible to deploy and follow running flows in a GreenVulcano® ESB server, having control about stepping, execution and environment (variables). VulCon Debugger allows the user to view and modify variables currently existing in a well determined execution point of the running service. Using the debugger, the developer is able to augment its productivity, diagnose anomalies and bugs, finally increase the troubleshooting.

Using the VulCon "Core" view, it’s possible to retrieve, deploy and start the VulCondebug feature. Firstly you should choose the service’s operation to debug:

Right-clicking the Operation to debug, the contextual menu is opened and you can choose "Deploy & Debug". When "Deploy & Debug" menu voice is selected, a new Debug launch configuration for the selected Operation is created and the GreenVulcano® ESB server is contacted and made ready for service debugging. Afterward, within a minute, the user must start the service in the ESB. 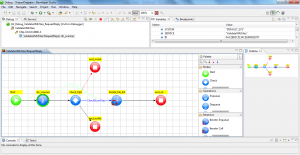 After the service to debug has been started, the GreenVulcano® ESB server stops service execution on the first node of the flow, following the "Start" node. If not, a graphical view of the operation is opened, and the node, where the execution is currently hold, is sharpened with a green pattern. Following is a list of possible node’s color patterns:

The Debug view, normally placed on the top left side of the perspective, shows the parts of the GreenVulcano® ESB operation flow call stack which are currently executed and how they relate to each other. Following is the VulCon Debugger call stack structure:

Variables View displays fields and local variables from the environment of the current execution stack. Variables View in VulCon debugger has following structure: 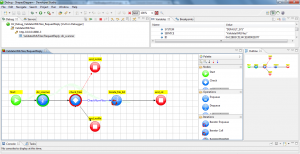 On the graphical view of an operation, is possible to toggle breakpoints from the contextual menu of a node using the voice Toggle Breakpoint. Breakpoints shown on Breakpoint View have following structure:

VulCon integrates the Debugger Framework in Eclipse; buttons provided in the toolbar have the same meaning of debugging a Java program. Therefore, following is a table that summarizes debugging key bindings:

A new preference link has been added where it’s possible to set preferences for the VulCon Debugger. 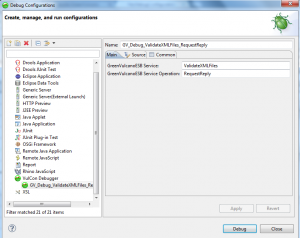 Launch configurations are created by "Deploy & Debug" option from the service’s operation contextual menu, or using the New option right clicking the "VulCon Debugger" from Run->“Debug Configuration…” menu. Following is a snapshot of VulConDebugger launch configuration:

The Main Tab allows the user to customize settings for the launch configuration.

The Source tab is a standard Eclipse option that allows you to control where Eclipse will look for your source files.